Colder than it looks

Odin eats the generic Oreos for lunch with the gusto of a starving man who had been sucking bark post-apocalypse and had just found a box of generic Oreos in the back pocket of a mail carrier slaughtered by a rampaging mob back before the zombies killed all the mobs.

Walking is a little complicated. He has to pin a box of Greek salad (getting in the mood for a pre-Easter week in Crete) under one arm, hold the box of cookies in one hand and simultaneously twist cookies apart, eat the halves without frosting, press the frosting-halves together to make whole cookies with double frosting and eat them, without getting hit by a car or spotted by a crow. If his mobile phone rang he’d fall apart.

The day is beautiful, beautiful, beautiful. Colder than it looks, sunny, and Friday before a week of vacation. Family doing well, hobbies doing okay, sort of a general feeling of… despairlessness that is really delicious, in contrast to the cookies which are, seriously, how did our society evolve to such a point, where a grown man eats something like this? And not just any man: Odin, god of the North?

But Odin is without despair. At this very moment, he can feel a new universe pressing in on this one, like a pig at a trough, like a pervert in a subway, like a deaf man in a mosh pit, like a ray of light reflected from a hospital window, like wind on an otherwise still day like those bugs that hop around on the beach like a bird high up like

At night, at the Large Hadron Collider

At lunch there is a pause in the drizzle and Odin walks to the store. He gets a sandwich and chips, although he always regrets getting chips, even though he has plenty to regret this week already, much of it linked to his inability to handle emotions properly.

There is a ‘plink’ as the grey crow lands atop a blue compact car.

It’s always a blue car. Maybe the crow prefers blue, maybe there is just a high incidence of blue cars in this neighborhood. Do car colors vary by neighborhood? If so, according to what factors?

Odin shares a ham sandwich with two grey crows and one black one.

There are a lot of pedestrians passing on the sidewalk and Odin tries to time tossing pieces of sandwich so no one notices, although he is not sure why. Huginn and Muninn also seem to be pretending not to know him when people pass, although they probably don’t know why, either.

At night, at the Large Hadron Collider, when the scientists are all asleep in their beds, the janitors and cleaning women do secret research of their own. Closing all the doors to keep down noise and turning on only one light in ten, they fire up the LHC and seek experimental evidence for the multiverse.

It started with the idea that additional dimensions might be undiscovered because they were too small, and the realization of a cleaning woman that the real reason might be: we didn’t realize what we were really looking for.

What if love was one of the missing dimensions?

After this, other missing dimensions were quickly identified (posited) and found.

Most basically, we (and everything else) consist of strings vibrating in the previously-known dimensions, and in the additional dimensions. Strings vibrate in dimensions including love, and the sacred, and the random and the accidental. They vibrate in beauty and surprise.

The LHC janitorial staff is looking into the following dimensions (and the particles associated with them):

And so at night, when the scientists sleep, the janitorial staff does its research. In the dimly-lit vastness of the LHC they learn that when you collide a Loveoton and a Sacroton you get a Bikkuriton and a Chanceoton. When a Bikkuriton and a Chanceoton collide, an Accidenton and a Novelton result. A collision between an Alikeoton and an Oppositon gives you an Eroton and an Orgaton. A collision between an Orgaton and an Eroton produces the original Loveoton and the Sacroton.

The janitorial staff work all night on their research.

Yet in the morning, when the scientists file back into work and don their white lab coats and protective goggles, the sleepy janitorial staff have gone home or to their second jobs, and the LHC is spic and span.

And then, despite their best efforts, it did come to an end. Medieval civilization came to an end, but the world did not.

Instead: Renaissance. An explosion of enlightenment and prosperity.

All that ended were some dark ages.

Could it be, that is what’s happening now all over again?

I stood out on the sidewalk watching it, using a sewing machine as an umbrella. Wearing my bowler hat. An umbrella wearing a bowler hat is absurd. The cat had a worm. Possibly more than one, so I took her and her brother to the vet for a pill each. And to make an appt to have her sterilized. They shaved her belly and did an ultrasound to see if she is pregnant, because she refused to pee on the little paper stick.

There I stood, looking at that familiar ultrasound monitor image, trying to think of a good joke, none coming. How will I explain it to my wife if one looks like me, like that. And all the while, big flakes of fallout drifting to earth out the window. Apocalyptic humor.

We’ve been looking for the leopard slug, or whatever it was, unsuccessfully. It’s out there, somewhere. It’s a feeling like when the jungle drums stop, you know? That slug is out there.

Except, it didn’t snow. 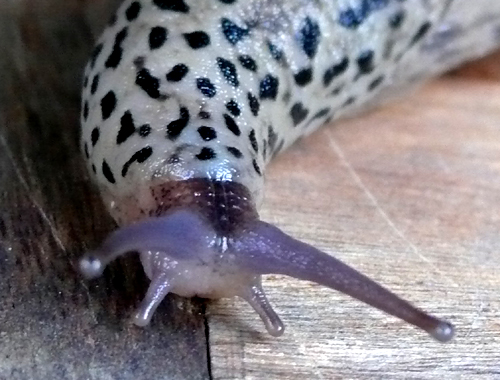 My wife discovered this bad boy out on the terrace this morning. “Honey, come outside and tell me if this is a rubber slug, because it sure didn’t feel like rubber when I grabbed it,” she said.

We have been playing with rubber slugs lately.

Her theory is that this guy is a result of my experimentation with beer and slugs earlier this summer. So I may have to update my findings. Or at least include beer-induced gigantism among garden slugs among the potential effects examined in next year’s expanded study.

Beautiful pattern. I am from the Pacific Northwest, and I have never seen a slug larger or more beautiful than this one. Here is a full-body shot: 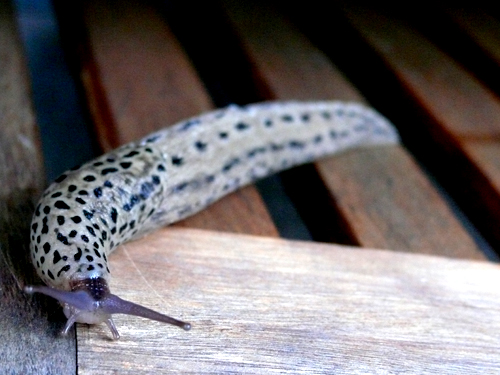 The end of the world interests me as much as the next guy, maybe more. The reason I don’t write about it here is I figure, either you’re interested in it, in which case you are already reading somewhere else about AIG managers investing their bailout $$ in cucumber masks, or you’re not interested in it and will find out the hard way soon enough. Either way, I figure we’re here for the kittens, amirite?

I had a dream last night – in fact, I was having it this morning when my alarm went off – that a Turkish international economist had called me from Washington DC and left a message on my thin white Nokia cellphone (Finno-Ugric/Turkish connection! woot, extra dream points). Here is the weird, dreamlike part: The message consisted of a telephone number that would be “open” for the next ten minutes, she said. She read the number, and then, knowing I never understand anything people say on my Nokia, she read it again with a mechanical male voice. At least two of the numbers were in a foreign language, however.

I wrote them all down when I woke, figuring I might buy a lotto ticket today. I just googled the two words I had not understood. One turns out to be a Banda initiation rite, the other is a word in another language meaning pilgrimage.