Go name a Madagascar hissing cockroach after a loved one for Valentine’s Day.

Posted by mig in Das Gehirn, Familie, The Bug

Mr. Cordyceps is all WTF?

In other words, I suppose, he is at a loss. It’s like, when he was 40 he was all, oh no, I’m getting old and so on, but he got over it and life went on. And then people close to him died and he got sad about that and unbeknownst to him sadness, or grief, became what sustained him.

He was a big drag to be around, to those who loved him.

He just sat around and moped and had no friends and was comfy behind this shell of grief.

Then a friend gave him an old accordeon and he played it and you know what? He realized he was out of grief.

He wasn’t sad anymore. He was still old, and tired, and overwhelmed by reality and bitter that no one had implemented his utopian visions, but he wasn’t sad.

He walked down the street thinking, gee the light is beautiful today.

He took a music lesson thinking, this is going very well, I’m glad I didn’t quit.

Reality continued to teach him lesson after lesson, but at least his ears were open now, and eyes.

He got on the bathroom scales and saw he’d lost a kilo. Then he noticed it was set to -1 instead of 0. Well, at least I didn’t gain a kilo, he thought.

He had a strong feeling that his life was over. And yet it continued. So maybe it wasn’t over.

Just uploaded this. Used recordings of my new accordeon, and a drum track, heavily altered. It seems quite loud to me, so maybe turn your speakers down before you start it. I’m still figuring out recording etc.

The Girl with the Dragon Tattoo

Went out with the family last night to see the Girl with the Dragon Tattoo remake with Daniel Craig. Starring Daniel Craig, I mean; he didn’t go with us to see the movie. I suppose he could have been there, but it was dark, and I didn’t hear anyone saying, oh look, Daniel Craig!

We all liked the movie. I had been planning to dislike it because i dislike the idea of Hollywood remaking foreign films. But I thought Fincher did an okay job, and the fact that everyone was a little better-looking in this one didn’t irritate me as much as I had planned, because visually it was a little better-looking in most respects, I thought, and the fact that they changed the ending didn’t bug me, and Craig acted better than I had planned, and so on.

What loved most was the music. The entire soundtrack was great, IMO, from the opening credits with the Led Zeppelin cover, to the end. My favorite moment was {SPOILER} the abbatoir scene where the killer has the journalist trussed up and is preparing to butcher him, and he plays Enya while he’s doing it. The rest of the soundtrack being NIN-style Trent Reznor stuff.
Anyhow. Fun night out.

A kind friend has given me an old accordion. I haven’t figured out yet what kind it is but it looks as if it may be a German concertina, it is rectangular and wooden and has buttons.

It is old, it once belonged to Russian soldiers left it at my friend’s grandparents’ place after the war.

I can’t wait to play it. I almost took it out of the bag right there in the restaurant where we were having lunch, but it is the best sushi restaurant in the neighborhood and her baby was already crying and I’d like to go back there someday. So I don’t know if it works yet.

You know how that is when you get a new accordion and are dying to try it out? But you’re there in a restaurant and can’t? So you promise yourself, as soon as you get home? And then you remember that your wife is getting home from a grueling business trip to Japan tonight so that might not be a good idea, either?

Also, I can’t actually play the accordion. That is, I don’t think so. I’ve never tried. We’ll see! 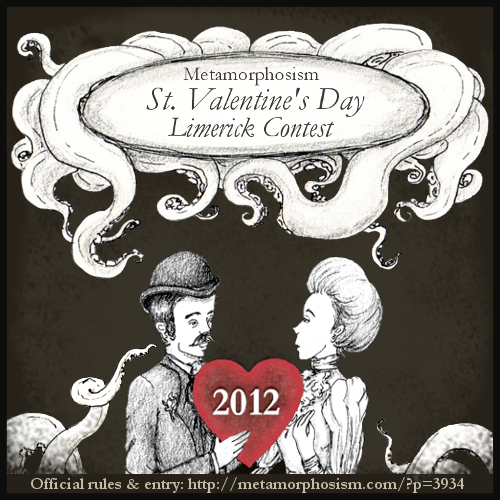 In the spirit of Art’s Birthday, which today is, namely participatory and cooperative creation of art, it is a great pleasure to announce this year’s Metamorphosism International Valentine’s Day Limerick Contest.

Over the years, hundreds of brilliant limericks have seen the light of day thanks to this contest, and we are looking forward to seeing a lot this year. As always, there are rules which, as always, are subject to arbitrary change at my whim, at short notice and unannounced. The decisions of the judge will be final. There will be at least two prizes this year, maybe more. Contact me if you have a prize you’d like to donate. My email is metamorphosist@gmail.com. Two prizes have  already been donated, one by Bran, her book The Slow-Moving Person’s Guide to the Zombie Apocalypse: A How-to for the Survival of the Unfit, and the other by me (with fine-art illustrations by Bran), namely a remaining copy of my book Little-Known Facts about Various Marine-Dwelling Animals (if I can find it in my messy studio).

(Many thanks to bran for this year’s logo!)

January 17th is Art’s Birthday. I doubt I will get anything else done in time, so here is my present to art. Happy Birthday, Art.

The film is footage from the Prelinger Archives, again. The soundtrack consists of an altered (slowed-down) drum track, Jomox T-Resonator, and electric cello run through various effect devices.