Man: I think I sprained my ankle putting on my ski boot.

Girl: Sure it wasn’t when you were skiing backwards and doing the splits?

Girl: It’s Friday night and I’m watching a movie with my dad. 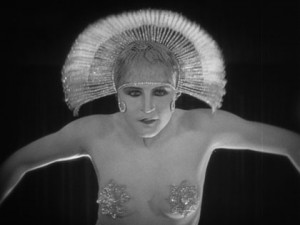 Made a new video with the kid this weekend, Goldschmutz White Bean Zombie, with Bela Lugosi, bodhran and white bean soundtrack:

(Uses footage from White Zombie, which is allegedly no longer under copyright, and footage Gamma shot in and near Vienna a while back.)

Just uploaded this. Used recordings of my new accordeon, and a drum track, heavily altered. It seems quite loud to me, so maybe turn your speakers down before you start it. I’m still figuring out recording etc.

January 17th is Art’s Birthday. I doubt I will get anything else done in time, so here is my present to art. Happy Birthday, Art.

The film is footage from the Prelinger Archives, again. The soundtrack consists of an altered (slowed-down) drum track, Jomox T-Resonator, and electric cello run through various effect devices.

The radio this morning was all blah-blah-blah, some guy got to pick 24 movies to be shown somewhere, I had the impression Venice. Let’s say Venice. Which movies would you pick? I thought about it, and decided I’d have to pass.

This will really shock you, but it’s been years and years since I’ve had the aesthetic real estate to consider films as art.

Here is what I do instead of considering film as art: