My car is in the shop today to have a thing hanging down repaired — a bit of black plastic trim off of which a little thing broke, which had been holding it to the metal part, causing it to hang, you know, nothing serious but sort of ruining the whole look, like a dangling false eyelash on a friend’s alcoholic mom when you are a kid, and you can’t just fix it with black duct tape because this is Austria or something. Hence I am driving Beta’s car, inflammatory bumper stickers and all. Dropped Gamma at school, got out to fix the outside mirror someone had dislocated, in the parking lot I suppose. Discovered the battery was dead upon getting  back into the car and trying to drive away. I thought I had turned off the radio and heater when I parked last night; maybe it was just the cold, but probably I forgot. I called my wife and she hurried over with jumper cables. I stood around in the falling snow for a few minutes, waiting, then sat in the car. When she arrived I hooked the cables (a first for me, in 49 years, can you believe it?) and it started right up. She suggested I bring the cables with me, which I did. Was careful to turn off everything I could find when I parked at the office. Lights, heat, radio. Also I packed a lunch today so I wouldn’t have to go out into the snow at lunch, but it lasted only 9 minutes on my desk so ehn. PS Beta don’t get excited about your mirror, it’s totally fine again.

On the joyless defenstration of cello teachers

When playing a high note, any note really, where appropriate, but in this case it was a high note, in fourth position or whatever it is called in English, you want not only to vibrate the note but also to hold the fingers of your left hand in the proper positions. They should not bend in the wrong way, or be held at the wrong angle. We went over this, my teacher and I. He asked whether the nerve damage in my left hand made it impossible for me to feel with the fingers, and I answered, “somewhat, but not completely.” In my opinion, the partial numbness is less a problem than general laziness and lack of knowledge of proper technique. He demonstrated the proper finger positions. He looked at my fingers, and at his. He remarked that it was easy for him, he had long slender fingers. But then, he remarked, X has sausage fingers too, and he gets by. X being some professional cellist of his acquaintance. I mentally measured the classroom window. The chances of surprising him so greatly that I could throw him through it like a spear were slight, and with his long arms and legs it would be nearly impossible were he to resist, turning into a stubborn, joyless struggle common in my dreams. I expressed optimism that I, too, could train myself to vibrate that high note.

First of all, wow. And my sincere thanks to all entrants. The entries to the 2009 contest can be found here.

Despite attempts by me to confuse things with random rule changes, there were significantly more limericks entered in this year’s contest than in past years. They were quite classy as well, and most managed to follow the rules, even when those rules called for Latin or Icelandic, or diseases that affect rat behavior.

There were even entries entirely in Latin, and Irish. Thanks guys.

Things went kind of crazy for a while, which was nice. As Anon wrote:

I think Muireann and Trish should both be disqualified. They seem to be using this competition as a forum to air their petty grievances and are not taking the competition seriously. For example in the last 28 posts there has been no mention of a burlesque performer and only one or two references to scalpels. Some of the limericks seem to be written in an unidentified foreign language and could have any meaning. How can that be judged? They should at least be asked for a translation. Also the limericks are of poor quality and there are too many of them. There should be a cap on the number of limericks allowed and there should be more control of unruly participants.

However, since Anon was posting from the same ISP number as Muireann, I am disinclined to disqualify her at the behest of a household member who obviously bears a grudge against her. (You might want to look into that, Muireann.)

We judged this year on the basis both of quantity and quality, using a weighted algorithm and a compass. As a result, the only possible contenders for places 1, 2 and 3 are, in alphabetical order, Jann, Muireann and Trish, and it comes down to their bonus points. Toxoplasmosis gondii would normally have automatically cinched it for Jann, as that is my favorite protozoan, and the one I was hoping to elicit with the related rule change. However, the sheer quantity of Muireann’s entries won her points, as did the Icelandic. Honestly, I did not expect to see much real Icelandic, beyond references to Björk, maybe. Trish was doing well, in the running for first place, until her broadband went out, setting her back somewhat.

As a Solomonic solution, I was briefly tempted to let Tony and Ian tie for first place, but my wife said that would be a stupid thing to do.

Anyway, here are the final results.

First place: Jann (extra points for toxoplasmosis gondii, and also more of her entries stuck closer to the rules, and the youtube burlesque link)

Thank you to everyone who entered. See you next year.

As far as this year’s prize goes, I am hitting the flea markets in search of trophies. I’ll mail the winners when I find some, or something similar, for mailing instructions. Or, how about you guys let me know where to send them?

Bran and I were just talking about blogging being less fun due to its commercialization etc, when the original point was subversion of editorial control by the self-publishing part, and of authorial control by commenters, and its being sort of replaced by twittering, facebooking, flickring, and so on, and whether one couldn’t somehow come up with something that had the features of the latter while maintaining the individuality and subversion of the former. No idea.

Comments here are never edited, except for spam and maybe one or two really hateful ones in the TEN YEARS I’ve been doing this, but the unfortunate misunderstanding-based flamewar (in limerick form! yay for metamorphosism flame wars!) in this year’s limerick contest has necessitated a (literally) last-minute rule change. No previous entries will be disqualified, but EXTRA POINTS will be awarded now for entries following the following rules:

Stop me if you’ve seen this 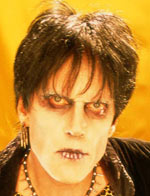 (The Cramps, “Aloha From Hell”)

The Sense of Being Stared at by Zombies

This morning, after being awoken by kittens at 4 AM after spending my first night alone while my wife was away on business and my children skiing with their grandparents and aunt, and kicking them out into the hall and ignoring their scratching at the door and then falling back to sleep and getting up at 5.30 to feed them and the big cats and then eat breakfast and feed the birds and clean litter boxes and take a shower and shave, I went upstairs to get dressed and standing there in the walk-in closet found the phrase “The Sense of Being Stared at by Zombies” in my head at the same time that I heard something scratching in the walls, much like the sounds taken to be rats in the ceiling or attic, I forget which, at the start of the novel “The Exorcist” (after reading that as a kid I lost any interest in watching the movie), and so stood there, wondering on the one hand what new resident this was I was hearing, a nest of martens, perhaps, or rats or birds or demons (when I thought of demons, another phrase entered my head: “The bad thing about slicing open demons is more demons come out”) and on the other what would differentiate the sense of being stared at by zombies from the sense of being stared at in general, and if it was humorous to imagine Rupert Sheldrake discussing the first draft of his book ultimately published as “The Sense of Being Stared At” with his agent, and his agent advising him to take out the zombies then it might be okay, or if I was one of those people who should not live alone for an extended time.

Tags: demons, insomnia, kittens, loneliness, solitude, the sense of being stared at, zombies