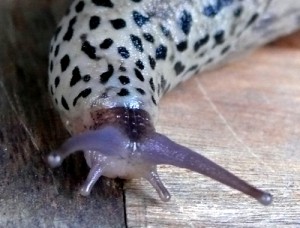 TRUE! nervous, very, very dreadfully nervous I had been and am; but why WILL you say that I am mad? The disease had sharpened my senses, not destroyed, not dulled them. Above all was the sense of hearing acute. I heard all things in the heaven and in the earth. I heard many things in hell. How then am I mad? Hearken! and observe how healthily, how calmly, I can tell you the whole story.

“Man, don’t EVAR go out into the yard barefoot first thing in the morning,” she says.

It is impossible to say how first the idea entered my brain, but, once conceived, it haunted me day and night.  Whenever it fell upon me my blood ran cold, and so by degrees, very gradually, I made up my mind to take the life of the slugs, and thus rid myself of their sliminess, and their instinctive greed for my tomatoes, for ever.

He went into the basement and got a big bucket.

He has a whole box of disposable rubber gloves he uses for wet plate photography. He puts one on his right hand and goes around filling the bucket with slugs.

“You have to cut them in half with scissors,” says his wife.

“You know what happened last time when you didn’t.”

He knows this, as well.

He has to shake the bucket to get them all out, some have a pretty good grip on the inside surface of the bucket. He reaches into the bucket and scrapes the last couple off. He already knows it was a stupid idea. It was one of those stupid ideas you should never do, but you feel trapped inside them once you start and you can’t stop, even though stopping would be the best course of action. You feel compelled to see them through to the end.

And every morning, when the day broke, I went boldly to the garbage can with whatever biodegradeable garbage there was, and lifted the lid and I looked in upon them while they slept. But they did not sleep.

In fact, they are very active. They all crawled up to the lid. It is hard to open the rubbish bin because the lid is heavy with slugs.

It was open, wide, wide open, and I grew furious as I gazed upon it. I saw it with perfect distinctness — eighty dull slugs, hideous, that chilled the very marrow in my bones.

So the man slams the lid shut  a few times to get the slugs off. He dumps garbage on them but they climb up the walls again. He dumps ashes on them later and that seems to do the trick. Also more garbage after that.

And now have I not told you that what you mistake for madness is but over-acuteness of the senses? now, I say, there came to my ears a low, dull, quick sound, such as eighty slimy watches make when buried under fireplace ashes and biodegradeable garbage. I knew that sound well too. It was the beating of the slugs’ hearts.

“I know,” he says, completing her sentence. “I should have cut them in half with scissors.” But, he thought, that seemed so cruel, not to mention you have slimy scissors afterwards.

No doubt I now grew VERY pale. Yet the sound increased — and what could I do? It was A LOW, DULL, QUICK SOUND — MUCH SUCH A SOUND AS EIGHTY WATCHES MAKE WHEN ENVELOPED IN FIREPLACE ASHES AND BIODEGRADEABLE TRASH. I gasped for breath. I could bear those slimy pests no longer! I felt that I must scream or die! — and now — again — hark! louder! louder! louder! LOUDER! –

“I’ll buy some cheap beer and put out traps,” says the man, also. Because he saw hundreds more, glistening with dew, when he went out to pick tomatoes, just now.