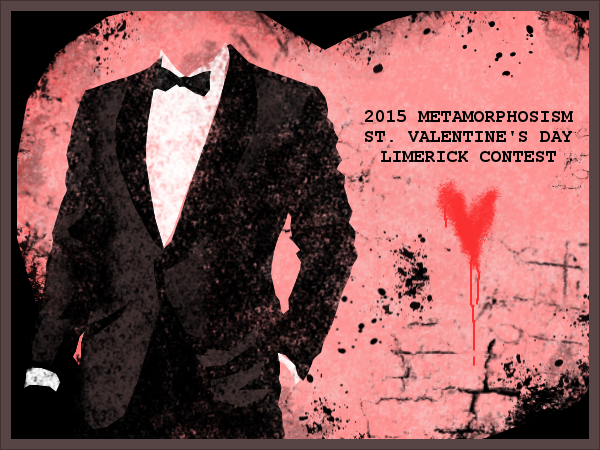 We here at metamorphosism.com have the distinct pleasure to announce the opening of this year’s St. Valentine’s Day Limerick contest. This could possibly be the contest’s 14th year, if you can believe that.

You may be wondering whether there is a prize this year. So far, no. But that could change. Yes, of course there is a prize. The winner will receive a copy of The Bug, a comic book starring Mig Living’s much-loved orthographically-challenged insectoid, tEh Bgu.

Before entering the contest, please read the following rules. As last year, to encourage you to read the rules, instructions on how to enter the contest are hidden within the rules. Contestants please note slight rule changes below, in the bonus theme section.

So I bought a tuxedo.

The tuxedo, don’t let anyone tell you otherwise, was invented by, or for, the Prince of Wales (Albert Edward, later known as King Edward VII), in 1865 because he wanted a comfortable, yet fashionable, dinner jacket he could wear instead of the coat and tails everyone wore in the evening back then.

Prince Albert Edward of the tuxedo is not the same person as Prince Albert (Albert, Prince Consort) after whom something else is named.

At the time, smoking jackets were popular – after dinner, men would gather in the smoking room to smoke, one supposes, and because they didn’t want to disturb women with the smell of smoke on their clothes they wore special smoking jackets. The tuxedo, also called a dinner jacket in the UK, is known as a smoking in many European languages, including German (in Spanish: esmoquin).

It is called a tuxedo in the United States because James Brown Potter’s wife was a famous beauty Prince Albert was chasing. Prince Albert convinced Mr. Potter to order a dinner jacket. The articles I have read were unclear on whether it was something he communicated to him before Mr. and Mrs. Potter arrived at the Prince’s place, so he would be properly dressed, or if it was more like, Hey Potter old boy, head on down to Henry Poole & Co. and pick yourself up one of these, there’s a good chap. And a short case of Mickey’s Big Mouth. I’ll keep an eye on the missus for ya.

At any rate, Potter introduced the tailless single-breasted dinner jacket, with a shawl collar, at the Tuxedo Club, an elite social club in Orange County, N.Y. in 1886. It caused an uproar. The establishment frowned upon the new style. The local newspaper wrote that those who wore it, “ought to have been put in strait-jackets long ago.”

But by 1888 it had become popular for formal and formalish evening events and that’s all I have to say about the history of the tuxedo.

Longer introduction than I originally planned, but I wanted to get that in about the original tux having a shawl collar and being single-breasted. Pointed lapels and more buttons are later variations, details imported from regular business suits, which sucks.

The tuxedo was originally revolutionary and casual, worn by dandies in the evening, and should absolutely have as little as possible in common with the day-time business suit.

So this week I was at a department store looking at tuxedos (alternate spelling tuxedoes, if you are Dan Quayle) because my wife and I are going to a ball for the kid’s school (they rent a palais in Vienna and it is listed in the formal list of actual balls in Vienna, and not just a prom, okay). We went to the ball once before, a few years ago, and I wore just a black suit and was woefully underdressed, everyone else had on a tux.

And as I wandered around in the formal wear section, I noticed three things: tails are awfully stuffy and over-formal, I have an irrational hatred of lapels on tuxedos, and the sales staff were ignoring me.

I was most surprised to discover that I had such strong opinions about the shawl collar/single-breasted style. I had never thought about it before but there it was, non-negotiable, some mysterious attribute that had always slumbered in me similar, but not exactly the same as, the attributes Tibetans are sometimes said to use to discover the reincarnations of lamas.

It seemed logical and unsurprising, on the other hand, that the salespeople were avoiding me, because it was close to closing time, I had had an exhausting day, my hair was crazy and who wants to deal with a crazy white-haired guy at closing time? I had to physically grab a salesman, who helped me find a suit to try on, but the outlook was grim because it is ball season and everything in my size was either sold out or really expensive.

I tried one on, it didn’t fit, the light in the changing room was too harsh and I looked awful, and when I came back out the guy had vanished back into the woodwork.

The following day I had more luck. I asked an older woman, who works in my office, for advice. She called all over town for me, which was fortunate because the next place I had planned to visit did have suits in my size, but only in purple, and I was looking for black. Instead, she sent me to a rental shop on my lunch break.

It was a nice place. It was small, full from floor to ceiling with rows of tuxedos and ball gowns, and had mostly natural light (more flattering). It was quiet, because it was actually closed for lunch, just me and the seamstresses and the manager; so no pressure. The manager and I discussed surnames, and Celtic names, and tartans, and the best way to select a shop in Edinburgh to buy a kilt (google it, he advised).

The first tux jacket I tried on fit fine. They fixed me up with a shirt, bowtie and cummerbund (Kummerbund in German, so I initially found it interesting that the suit is called a Smoking in German, but we call a Kummerbund a “cummerbund” in English, as if there were a little linguistic trading back and forth going on, but no, it turns out to be even more interesting than that, Kummerbund is also imported to German from English, which itself borrowed cummerbund from the Indian subcontinent, adapting kamarband, from the Persian compound kamar (waist) and bund (closed)) and matching shoes and I was good to go.

You can rent or buy the tux at this shop. The suit was nearly new, yet nicely broken in, so I bought it. They did the alterations, I picked it up today on my lunch break (along with some fruit and vegetables at the nearby market, which my wife called and asked me to get) and it’s hanging out in my car right now. I can’t wait to get home and put it on and let the cats rub themselves all over the trousers.

Sometimes you are the hammer

Posted by mig in Das Gehirn

Tags: sometimes, sometimes you are the hammer