So, yeah, Beta is in New York (actually, as I write this, she is cooling her heels on a 7-hour layover in Heathrow).

She is visiting her friend Lukas. She will be in NY for two weeks.

Here is a picture of Lukas: 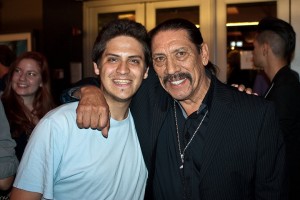 Lukas C., with some other guy.

The red wire, or the blue wire?

The scene: a villain’s hide out. One wall is covered with monitors (salvaged b/w TV sets dating from the late 1960s/early 1970s) showing things going haywire around the globe. One wall is made of glass, beyond which hammerhead sharks circle in a tank of saltwater. A shoe containing a foot rests in the sand on the floor of the tank.

Villain: [running around looking flustered] OMG. Where’s that panic button? Is this the panic button, or the self-destruct button? OMG.

Girl: How do I plug in the microphone?

Girl: I want to play around with your new microphone. I’m sitting here at home in the cellar with the speaker, the mixer (I have the mic plugged in already) and all these cords and cables.

[Sound effect: klaxon signalling security breach, or re-entry of warheads, or both]

Girl: No sound is coming out. What do I need to do? I’m just going to plug stuff in at random until it works, then I’ll know I got it right.

Villain: Er. That’s not so good. If you short something out, that would be bad, because I have a theremin performance tomorrow and need some of that gear.

Villain: Listen. The mixer and the speaker must be plugged into a power source. Their cords are in a white plastic bag in a black cloth bag beside the speaker. Got it?

Girl: There’s only a blue bag.

Villain: Listen, okay, blue bag. Full of a mess of cables. The speaker cord is in there. The mixer cord is either in there or loose in the black bag.

Villain: Heavy small black cube with cords coming out two sides. One has a round end that plugs into the back of the mixer,the other end is a normal electrical plug.

Villain: After you get the power sources hooked up, you then need to connect the mixer output to the speaker input.

Girl: I have a cable in the speaker already. Which hole does it go into in the mixer?

Villain: Um, what do they say? They should be labeled. Not control room or headphones. Output or line out or something.

Villain: Yes, sounds good. L or R should both work for the mic.

Villain: [Slaps forehead] Gah! I forgot to tell her to turn on the speaker. She’ll figure that out, right?

The soteriologist goes into the playroom to gaze upon the back yard, which looks so different now that a guy came and pruned a bunch of stuff and removed some bushes, everything had been so crowded. He notices his 13 year-old daughter. She is wearing her black tutu skirt, black net stockings, a black hoodie, and shoes of some sort. She is truckin’ up the cellar stairs with her bicycle, a pack in the basket.

Running away, in other words.

The sight fills him with a surprising joy.

God bless you, child, he thinks. Run as fast as you can.

It will be raining soon, so he cuts her off at the pass and says wait, let me get you a warmer coat. They get a coat sorted out, and he puts on shoes and a windbreaker and goes with her.

I’m running away, you can’t come along, she says.

Just part of the way, he says. She rides off and he jogs alongside, making conversation. The conversation quickly advances to talk of heart attacks and he asks her to stop and walk for a while, and to his surprise she does.

The soteriologist and the girl walk along the creek. Now and then a rain drop hits them, but it’s not really raining yet, just toying with the idea.

It’s such a beautiful Sunday afternoon.

The soteriologist expresses his shame at his mishandling of a situation involving preparation for school, confiscation of a mobile phone, verbal and physical bullying and general nastiness and disrespect.

The soteriologist mentions how beautiful it is. He says it reminds him of where he grew up. He would have liked to run away then, but there was nowhere to go. Everything was far away.

It gets better, he says.

He speaks of various things. He explains his cosmology and how she and her sister and mother are at the very center of it.

He explains why he is ashamed. It involves expectations of wisdom he failed to meet.

He says he would like to run away sometimes. It would be nice to have a cabin on a lake you could run away to at times like this. He says, what about your house in the back yard?

She says, it’s wet inside.

He says he’ll look into that.

He says, on the one hand it gets better, thirteen is hard. On the other hand, it never gets easy. You’re never done. As soon as you get used to one level, you’re on a different level figuring that out. Level, stage, whatever.

Learn to talk, and they potty train you. Then you have to get used to school. Then adulthood. Then your hearing goes, or your vision. Then your joints. Then your mind, or something.

But it’s not all bad.

Look how the light reflects on the creek.

I’m running away, she says, you’re not supposed to be so nice.

She says she’s just running away to a friend’s house, he can come pick her up in an hour.

He suggests stopping for a cocoa at McDonalds. It is cold out, after all. Then they can go home again.

He doesn’t want her to have the feeling she lost this round, whatever else happens, he decides.

She thinks about the cocoa. They stop under a bridge to talk because it’s getting windy and the rain is picking up. Not so much that she can feel it yet, because she is wearing a warm hat, but his hair is thin, or short, or both, and he can feel the drops hitting his scalp.

There under the bridge, they talk about falling into the water from rowboats. He did it right about where they are standing. She did it in the Czech Republic.

He prays to Life for everything to work out okay. Sometimes you have to park your helicopter and pray to Life instead.

After two hundred meters he looks back and she is gone.

A minute after he gets back home, he is still taking off his shoes, her friend’s mom arrives with her and her bike in the back of the truck.

He builds a fire and they have cocoa. He gives her back her mobile phone. She says, if he had waited two more seconds under the bridge, she would have come home with him.

Yesterday my masseuse put two bones back where they belonged in my spine, and shortened my left leg. I was all, no, just lengthen the other one, but that was not an option.

This morning, Debussy’s only piece for string quartet came on the radio when I was parking in front of the office.

Actually, it came on a little earlier, while I was driving to work, the last bit of my commute, and was still on when I parked, come to think of it. My first thought was, this is some sad music. My first reaction to it, before thinking, was to get all sad, see.

How full of sadness, and yet how beautiful.

It was the recording by the Jerusalem Quartet.

I sat there listening. The DJ said after that the audience considered it decadent the first time it was performed. All that death and beauty rolled up into a maki.

Tiefstapeln is currently my favorite German word, besides maybe Zniachtl, which is a dialect expression meaning shrimpy person. A literal translation would be, to pile lowly. Hochstapeln, which might seem like an opposite, translating literally as to pile highly, means to con someone. A Hochstapler is a con man, or one sort of con man. Tiefstapeln means, I gather, to portray something or oneself modestly, except that there is an element of dishonesty or disingenuity involved, so I guess it’s another kind of con.

It’s partly the cello. This morning at breakfast, I told my wife I played cello with abandon last night, for the first time.