It’s raining. The light outside is remarkable. Dark sky, with brighter spots lighting various deciduous trees turning gold at various rates. A glossy wet crow stands on the balcony railing outside my office. I go outside and place dog treats along the railing. Before I’m even done, I glance over my shoulder and there’s another crow 2 feet away with a beakful of dog treats hurrying me up.
Hang on a sec, I have to go back out and refill the dog treats.
Ok.
The problem with life is eventually the crows shit all over your balcony and someone says, hey Mig stop feeding the crows they’re shitting all over the balcony.
Hang on, they’re cawing at me for more treats. BRB
Thing is, though, it’s also nice to tell yourself you know the crows know they can count on you.
Maybe the rain will wash the shit away. 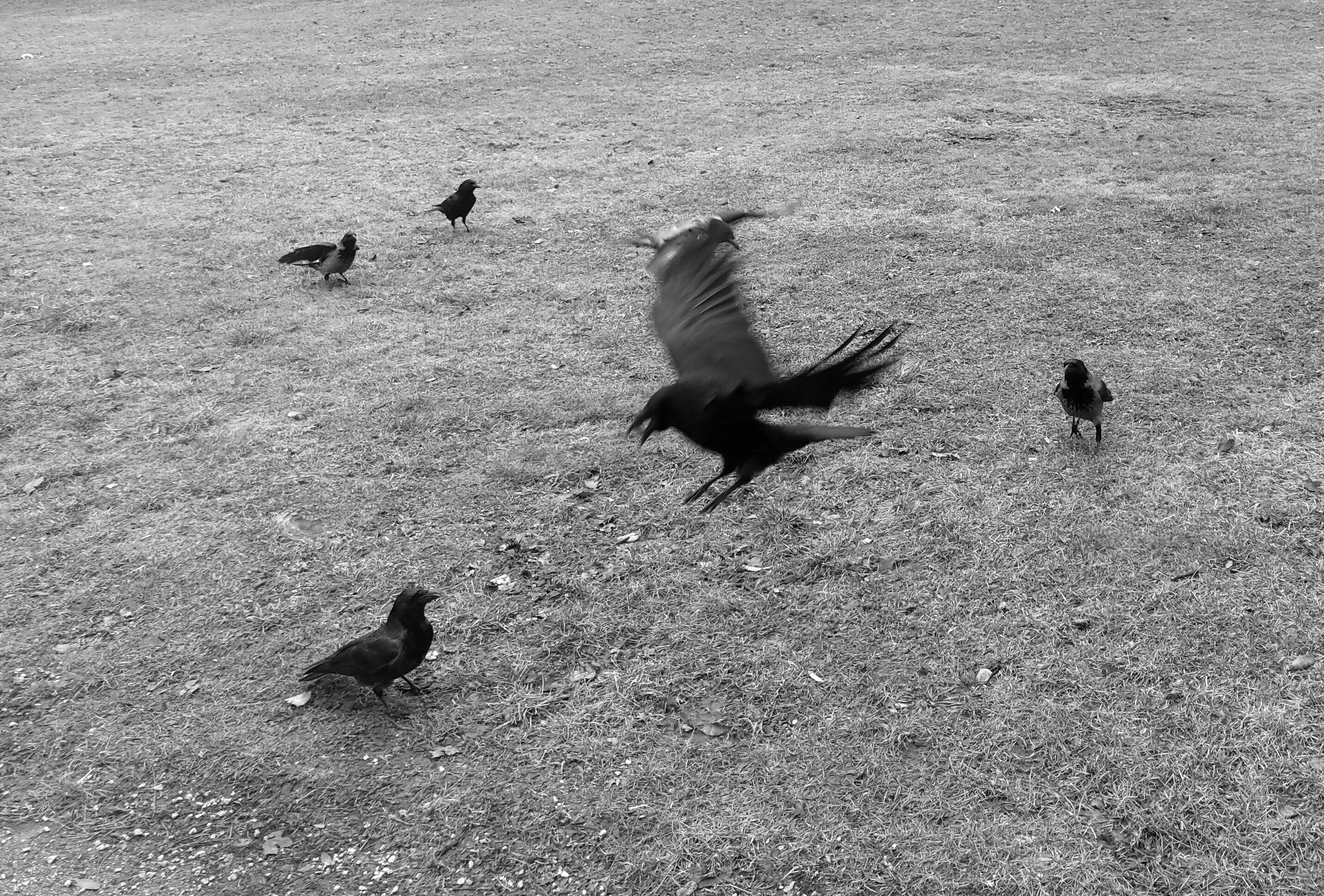 Her: … so your turn, what’s your fantasy?
Him: Erm.
Him: Instead of Covid-19 it’s Corvid-19 and spread by crows and everyone is afraid of crows.
Him: All but one hairy old guy.
Him: Who they call the Crowmaster.
Him: But he’s not a master of crows. He’s more like a pal.
Him: That’s how it looks from his side. Who knows what a crow thinks.
Him: Could be they just like his dogfood.
Him: But when dozens of squawking crows swirl around him in the park on a windy day, he can understand where the Crowmaster comes from.
Him: And because everyone else is shunning crows, his flock in the park gets bigger and bigger.
Him: And the weather gets windier and windier.
Him: And people get more and more scared. Of him too.
Him: And crows everywhere, hanging in the wind, squawking in all the tree branches.
Him: On the windiest day, so many crows are flying around you can’t see him anymore.
Him: He disappears from view.
Him: The wind dies down and the crows disperse.
Him: And the guy is no where to be seen.
Him: Then maybe it snows a little bit, before the sun comes out.
Her:
Her: Ok.

The engine warning light is on, I say to the mechanic. Can you plug it in and see what’s wrong? Also the windshield is cracked and the back seat windows roll themselves down.
You’ll have to leave it here, he says. We’ll call you later than you expect and say something cryptic only car guys understand. Or better yet, we’ll wait so long to call you that you call us first.
Sounds good, I say. Can you have your cleaning lady drive me to the station?
Will do, he says.
I am happy because I catch the same train as always (the one I take on the days I use that station because I drop Gamma there, and not the usual station nearer our house).
Then I am happy because the bus doesn’t drive away without me.
Then I am happy because I figure out relatively quickly that the connecting bus isn’t operating because school vacations.
Then I am happy because I can just cross the street and take a subway to a different bus.
Then I am happy because, when I trip and fall on my face entering the station, I don’t break anything. Fuck you too, ground.
Then, because so many nice people stop and ask me if I’m okay, including a man in a black fedora and an attractive young woman.
Then, because, when I tell them I think I’m fine, they all look at me and ask, Are you sure? Which suggests it was really spectacular.
Then, because, thinking about it, I had managed to avoid falling on the guy in front of me, which would have caused a domino-like catastrophic group fall in the subway station.
Then because the next bus isn’t very full because school vacation.
Then because two crows greet me at the office, demanding dog food.
Then because I am sitting down at my desk before I realize I am dizzy.
Then because youtube suggests a bunch of dark ambient music.
Then because the crows are all, like, waddup? And I’m like, waddup? And they’re like, this is so fucked. And I’m like, what. And they’re like, whaddya mean what? Everything dude. And I’m like, now would be a good time for like aliens or god or someone to intervene. And they’re like, what are you talking about, you’re the god of the office. And I’m like, oh yeah I forgot.
But that’s a non-interventive position.
Unfortunately.

In heaven the air is full of bees

So this morning before work I walked down to the store and got some stuff for lunch and on my way back to the office some crows stopped and visited and I gave them some peanuts and went back to the office and ate the stuff I had bought for lunch and worked and then at lunchtime I went to the park and strolled around and found a shady spot under some trees and there was a large box-like wooden construction there that held four beehives, two of them populated and busily at work and I sat and watched the bees, which I love, they’re my favorite insect, always have been, I was fascinated by the bees that lived in my uncle’s wall and I visited him often to listen to them when I was a little boy, but I really fell in love with bees earlier this summer when the lavender by the gate was in full bloom and full of bees and when I came home and opened the gate a cloud of lavender-scented bees enveloped me and brushed my face without stinging me and that’s when I fell in love with bees. Then four crows, crows that didn’t know me yet, as I had not yet fed crows in the park, showed up and I threw them a peanut and then another and after three or four peanuts one had the cojones to try one and then three were competing for the peanuts I threw them while a fourth one watched from further off and I threw them peanuts and watched the bees until I ran out of peanuts then I walked back to the office. On the way a crow, one from before, stopped by and watched me for a while and I watched him and checked all my pockets but I was really out of peanuts so I apologized and walked back to my desk.
Some days you just need bees and crows.

The creature of the brilliant day

The creature walks, the ghost, the spirit from the vacant house that youngsters see at dusk, over their shoulder or their father’s arm, watching from a cracked window, a curtain moving slightly in the breeze; it walks in autumn cold, clear autumn sun in a new winter coat and realizes, this is what color was made for, a crisp fall day – gold, orange and yellow against a sky of jigsaw-puzzle-blue, birch trees knitting it together with white and black and children in red jackets. The creature is eating lunch, cookies that are not what they promised and something with penne and curry and chicken and it walks a different street, past the artist’s mansion, where the crows do not know its face, not to avoid sharing, but to avoid interacting, and not out of some misanthropy (or miscoronisy) but because this afternoon demands one’s full attention. Pavement, dead leaves, brown grass, hand rails, green grass, tree bark, tar, a scrap of paper, apartment house facades, a mother speaking on a mobile telephone in a back yard while a small bundled toddler plays, facing away from her at an angle of 45 degrees, staring at something. One crow says something to another crow in a friendly voice, not a warning voice. A black limousine tailgates a black SUV. A man jogs past wearing a light summer jogging outfit – shorts and a white t-shirt. The creature walks.