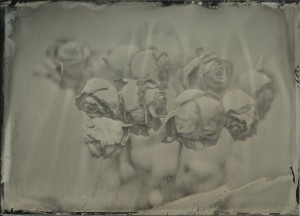 This is the second plate I took of the same red-and-white roses that day – in a glass vase on a table in front of a wooden fence. Outdoors, drizzling and wintry and starting to get dark, so the exposure on this one was 90 seconds. Same wooden German travel camera from sometime in the early 20th century, Carl Zeiss lens. (I guess I can stop writing that since this is the only camera/lens I currently have.)

This picture is a lot softer than the previous one, which is largely due to the different collodion recipes used, I think. It has a lot of streaks on it, which I am assuming are from the new developer I am using – maybe a different formula? Could also have something to do with the temperature, it was getting cold and although I poured everything indoors, the plates were outside for a minute or so each.