Americans can do anything

Just skip this if you’re tired of hearing about the Republican response to the President’s recent non-State of the Union speech.

Or watch this for the executive summary.

I hadn’t planned to watch the response, I even missed the fact that there had been one, until I accidentally stumbledupon it yesterday. I made it about 30 seconds into it before saying, What a patronizing weirdo and going somewhere else.

There was a nice discussion of it at mefi. A lot of people twittered tweeted twittered about it at twitter.

Didn’t see anything at facebook, but that figures. Myspace crashes my computer, or my eyes, so not sure about that.

Someone said he, Bobby “The Exorcist” Jindal, reminded them of Barney Fife the way he walked out there between the flags. Someone else said he looked as if he had just left a dead, or not-quite-dead, body in his basement. To me he looked like a combination of the two.

Someone else said the reason he sounded as if he were speaking to kindergarten children is because he was, because they’re going to be the first demographic to vote for a Republican president again.

I was basically just really, really appalled by so many things. Why this sort of speech? Why this awful delivery? Why this particular person? 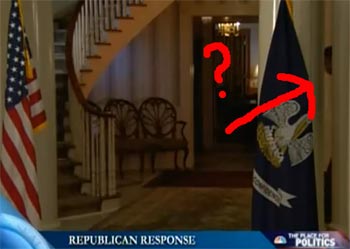 He creeped me out before he had said anything. I watched the first few seconds of the video over and over to figure out why.  It was something about his entrance and demeanor. Not only patronizing, but creepy. The serial killer thing.

I thought it might be the crazy eyes, but that could be attributed to craven political ambition, too. I finally decided it was his posture. The first glimpse of him here shows him leaning forward, and he keeps this crooked stance most of the time, off and on.

It makes you look weird, Bobby. Stand up straight!