Garlic only makes you tasty

A necrodefiled vampire walks into a bar…

I have an enemy. No, I have two enemies.

Before that: “No thanks,” I said. “Is powerful talisman,” she said. “Will protect you from your enemies, who caused your traffic accidents with their bad wishes.” “Seriously, no thanks,” I said. She shrugged and walked off, not really in a huff, but I wondered if now I had made a third enemy, a fortune-teller who was going to curse me now.

Before that: She extracted a little embroidered coin purse from her larger purse and removed a pinch of herbs, held them up for me to smell. I smelled nothing. “See, smell that? Powerful herbs, brother” she said. I nodded. “Powerful, okay,” I said. She put the herbs into the little square of paper she had begged from the cleaner and folded it up into a tiny package. “You add a little salt and a little bread. You don’t eat it, just carry it in your pocket to protect you.” She took out a little wooden rosary, asked me my name and said a long prayer over the package, including my name. “Here,” she gave me the package. “How much do you want to give me for it? It will protect you.” I shook my head. “I already gave you five Euro,” I said. “That was for the palm reading,” she said.

Before that: She didn’t let go of my hand. “There’s more. You are happy now, but you have enemies. No, you have two enemies. Intriguing against you, wishing you ill.” “No fooling?” I said. “Wishing you and your family ill. You need protection.”

Before that: Over her shoulder, I saw the dry cleaner cashier wore a bemused expression on her face. We both ignored her. The fortune-teller took my hand. Her hands were warm. “Don’t worry, my color won’t come off on you, my hands are clean,” she said. “Same here,” I said. “My hands are clean too.” “You have a happy life,” she said. “You don’t have a lot of money, but you don’t care about money. Family, happiness are more important to you.” “That’s correct,” I said. “How do you know that?” “It’s all in your hand,” she said. “You are not too worried. You don’t have worries. Your forehead is smooth.” I can tell your fortune too, I thought. You are an outcast, I thought. You have had a run-in with the police — I had seen her picture in the newspaper a couple years ago, when she (or someone a lot like her) and an accomplice had been arrested for bilking a woman out of thousands of Euro with a protection-from-bad-luck scam. You have lost children, I thought, to death, or to life. You are very short, and very old, and very scary-looking, I thought. “You have a scar,” she said. “Is it on the left side or the right side?” “Amazing, dude, I have scars all over,” I said. “You have had a traffic accident. No injuries, only damage to the car.” “Twice,” I said. “My fault both times.” She nodded sagely. “You are married, but not to your great love.” Wrong, I thought, but I played along. “Why not? Divorce? Something else?” she asked. “Just didn’t work out,” I said. She nodded some more. “You had worries about your children. Health, or school.” Boy, right there, I thought. They were both tiny preemies. “They’re fine now, though,” I said. “You have golden hands, you can do anything with your hands.” “Thanks,” I said. I sure hoped she was right about that, I had to make a bunch of sushi later in the day for guests who were coming over. And gyoza, and yakisoba, etc etc. My turn came and I picked up my suits, paid, palmed a five Euro bill from the change. “Here, come outside, I’ll read your palm some more,” she said. I gave her the money.

Before that: I went into the dry cleaners to pick up my suits. I was third in line, two ladies were in there before me, a sixtyish Austrian woman who picked something up, and a tiny old Gypsy. The Gypsy was taking sweets out of an Easter basket on the counter. “That’s enough, now,” the cashier said. “Just a couple more,” she said with a thick Eastern-European accent. “I have kids, kids have to eat sugar,” she continued shoveling chocolate eggs and bunnies into her purse until the cashier removed the basket. “Could I have a bag for the candy?” the old woman asked. No one was looking at the old woman. We all avoided eye-contact. This I found crappy, so I stopped avoiding eye-contact. “We don’t have any bags.” “Give me a piece of paper, then.” The cashier gave her a tiny square of note paper. The old woman turned to go, then approached me. “Give me your hand,” she said. Alright, I thought. Gypsy palm-reader.

Before that: “Your eyebrows are turning white,” my hair stylist said. “I noticed,” I said. She held up a big hand mirror so I could see my hair all over. I nodded sagely. Big deal, a pig shave is a pig shave, even if it takes forty-five minutes and includes a soporific scalp massage and is called a styling. Main thing is: it’s short because Gamma loves to run her hands over it when it’s good and short. Nothing like a six-year-old girl running her hands over your scalp with an expression of glee on her face, is there? (Later when I got home and she did it, she said, “Now the hair on your head is shorter than the hair on your back.” A couple minutes after that, I had my wife shave my back.) My cell phone rang. It was my wife. She told me to go here and there to get some stuff; “and you could pick up the drycleaning too,” she said. “But hurry, we have a lot of cooking to do.”

Before that: She wasn’t happy I was leaving to get a haircut, because we had guests coming over later in the day. “It will only take a jiffy,” I said. She looked skeptical. As if she thought something unusual would happen if she let me go out by myself.

Weekend of the deer

Made me wonder what deer symbolize for me, if waking symbology is as important as dream symbology. Not necessarily what deer are doing in my life, but why do I notice them? And not, say, the debris along the median strip of the freeway?

This then made me notice the median debris all the way to work. Does it have its seasonal patterns too, like the deer? Along with fast-food restaurant napkins, for example, it included chunks of ice fallen from trucks this morning.

Sorry to people who come here looking for actual information

A sort of despair

The secret of hotness 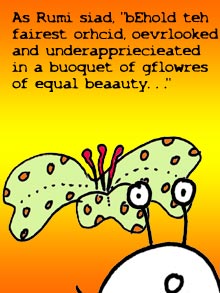 Pass him on the street and if you notice him at all, he’s just an average guy, forties, grey hair, likely as not in a dark suit, ambling along somewhere, in no hurry because he left at least half an hour early to get where he’s going and has plenty of time.

But he has a secret.